Like many rust disease species, rosaceous trees and Juniperus species are required for the fungus to complete its life cycle. The fungus primarily infects apple/crabapple species and their alternate hosts, eastern redcedar and Rocky Mountain juniper. However, several other Juniperus species are also susceptible to infection, such as J. chinensis, J. horizontalis and J. communis.

The most frequently noted symptom of cedar-apple rust is the bright red-orange-yellow spots that develop on apple/crabapple leaves and spots on the fruit in mid-summer. However, the season’s first symptoms begin much earlier in the spring on Juniperus species.  Junipers develop 0.25–2” diameter, rounded galls on infected needles and twigs. During prolonged wet periods in the spring, typically from late April to late May, the juniper galls secrete orange-brown gelatinous tendrils.  Fungal spores then spread to the apples and crabapples continuing the disease cycle.

Pruning of apples and crabapples to promote light and air flow, especially on lower and interior branches, can help to reduce leaf wetness, a prerequisite for infection. Prune dormant galls from junipers during the fall, winter and early spring before the orange-colored spore tendrils are formed.  Reducing overhead watering from sprinkler systems can also reduce infection.  Spraying apples and crabapples with multiple fungicide applications starting at bud break will provide the best protection from this disease, keeping them healthy and green throughout the season. 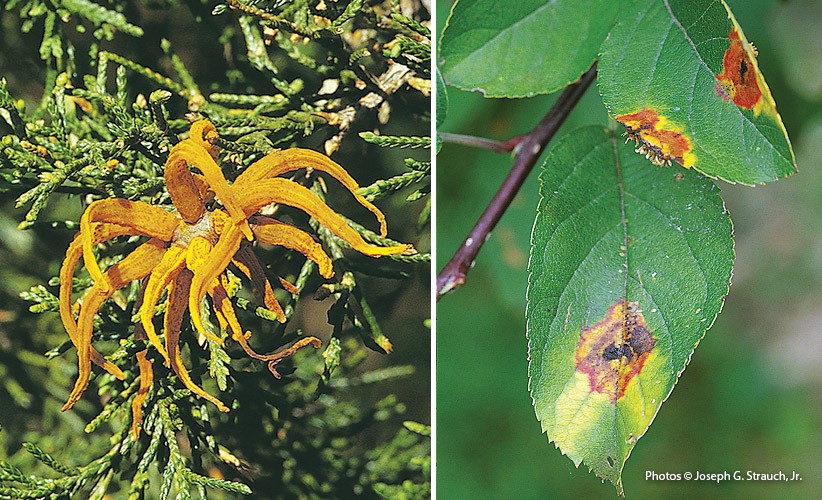