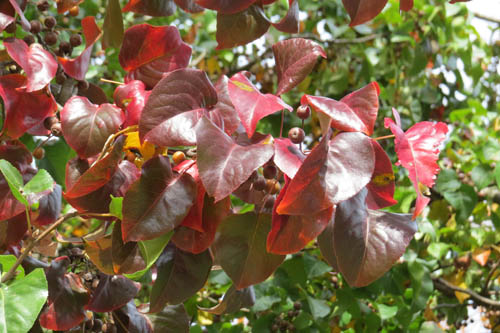 Introduced from Eurasia, the Callery Pear, named after French missionary Joseph Callery, who first collected the species in 1858, has become one of America’s most popular street and garden trees. Through nursery selection, its messy fruits and sharp thorns have been bred out of many cultivars.  Also eliminated in most of the earlier cultivars is the Common Pear’s susceptibility to fire blight.  Some of the newer cultivars that have been bred with a more vertical branching habit to reduce breakage, unfortunately have shown a higher susceptibility to fire blight and rust diseases.

The “Bradford” Callery Pear is the best-known cultivar and one of the most attractive.  It can attain heights of 30 to 50 feet tall and about 25 to 30 feet wide.  Relatively pest free, pollution and drought resistant, it was once touted as a miracle tree, perfect for urban conditions.  Now that the trees have grown up, it has been seen that the tight crotches are very weak and prone to breakage, disfiguring or destroying the trees.  Since then, other cultivars such as Red Spire, Aristocrat, Capital Cleveland and Chanticleer have been introduced with all the attributes of the Bradford but having a better branch structure. 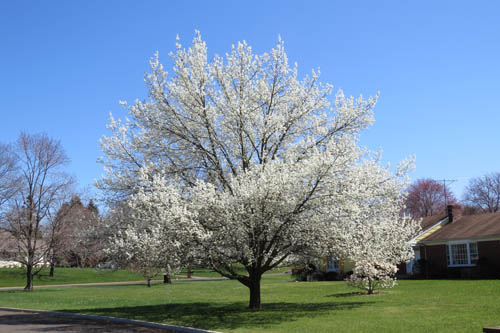 Callery Pears are best planted balled and burlapped in late winter or early spring and do best in full sun.  The 3/8 inch white flowers emerge in 3 inch clusters in early April and form the familiar snowballs we see lining our streets.  As the flowers fall in late April to early May, the heart shaped leaves appear.  Dark green and glossy in summer, the leaves turn a crimson to purple In November.  Their late leaf drop can frustrate those charged with cleanup duty.  The small round fruits are inedible and no consequence to humans, but in winter become a prized food of some songbirds.  Some of the newer cultivars also produce more fruits which can be messy in the wrong location, and these fruits have now gone to seed so freely that in many areas they can be considered as an invasive species.

While still a beautiful tree in multiple seasons, and commonly planted as both an urban and landscape tree, it is no longer touted as the miracle it once was.  All trees have beauty and value but putting the right tree in the right place makes all the difference.